Posted on December 26, 2015 by robtilleyphotos

It has become a tradition for many photographers to publish their favorite photos of the year.  I embrace this tradition because it helps me review my photography for the year and also is a good way to introduce new images to my followers. I have included some background information for each image below as well as why it was chosen.  These images are published in chronological order so the order in which they are published is not any indication of my preference for any particular image. I hope you enjoy viewing them as much as I enjoyed shooting them!

The first trip I took in 2015 was to Yellowstone in February.  I was traveling with my good friend Gary Hamburgh and we had a great trip.  At lower elevations, there was not much snow, but it was a winter wonderland in the higher areas.  This first image is perhaps the most iconic spot in the whole park, Lower Yellowstone Falls. 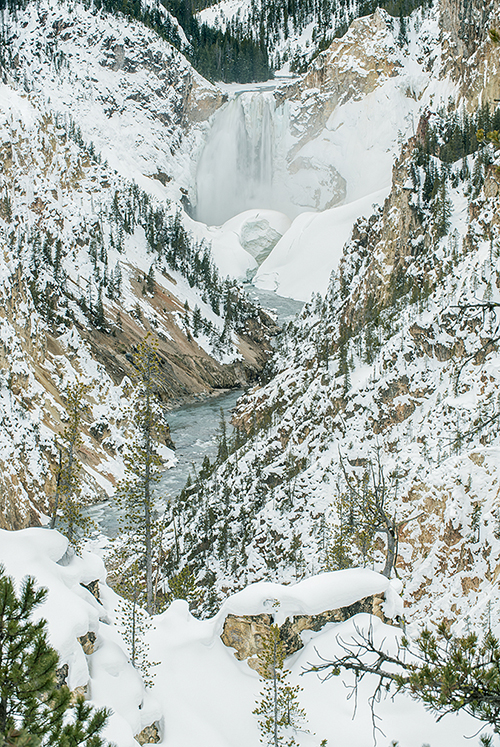 While I never pass up the opportunity to shoot impressive landscapes, I also like to use different techniques to produce impressionistic images.  While we were in Yellowstone, we stopped at a forest that had been burned in a forest fire.  The burned trunks were very black and stood out against the white snow.  So I decided to use intentional camera movement.  For this image I used a long shutter speed and moved the camera up while the shutter was open.  This produced the abstract feeling of the image below.

I also like to shoot close up shots of details which can also produce an abstract feeling.  I was walking along the boardwalk near Old Faithful which has many hot springs and geysers where I found this scene.  This image is frozen geothermal runoff from the nearby geothermal features. I like the colors and lines of this composition which I call Earth Tones.

We took a photo tour while we were in Yellowstone on one of their snow coaches.  Our guide was familiar with the wildlife and in communication with some other tour leaders.  One of the other tour leaders said that they spotted a bobcat near the Madison River and when we got there we found the bobcat stalking a muskrat.  I decided to use a pan blur to capture the bobcat as it leaped into the river.  This technique kept the bobcat relatively sharp, but blured the background as the camera moved with the bobcat.  I like the sense of motion in this image.

In February we visited Mexico and for the first time Oaxaca which is known for its indigenous culture.  One evening we attended a demonstration of Mexican folk dancing at a local hotel.  I was fascinated by the colorful costumes and energetic dancing so I decided to use motion blur.  For this shot I used a long shutter speed and mounted my camera on a sturdy tripod.  This technique caused the dancers to blur while keeping some parts of the image sharp.  I like the sense of motion and vibrant colors in this image.

In March we visited Kauai for the first time in many years.  One morning I got up early and hiked out to Mokolea Point with a photographer friend in the dark to shoot the dawn light.  I was very pleased to find the crescent moon low in the horizon just as the dawn sky was beginning to light up.  I like the simplicity of this image with the crescent moon above the ocean and this ancient lava field. 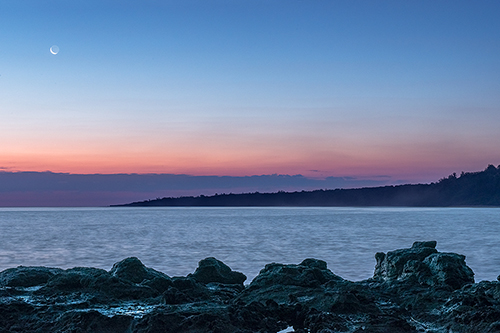 In late May we traveled to Portugal for the first time.  We started in Lisbon and slowly worked our way up to Porto and the Douro Valley.  When we were in Porto I found a great spot to shoot the Douro River at sunset.  I like the illuminated buildings of the waterfront against the beautiful sunset sky in this image.

After Porto we spent several days in the Douro Valley.  This area has been growing wine grapes since Roman times and the hillsides have that well tended look which comes from centuries of cultivation.  It is the custom of the Portuguese to grow olive trees mixed between the vineyards which makes for some pleasing compositions.  This shot is a typical scene of the Douro Valley.

After touring Portugal we traveled up to Spain and visited Santiago de Compostela for the first time.  Because it is home to St. John’s grave, this town became famous as the destination of many pilgrims from all over Europe.  Since it was such an important town for the Catholics, they built many monuments.  The image below is in a former monastery which is now used as the Museum of the Galician People.  I had never seen a triple spiral staircase before and I thought it looked best looking up towards the ceiling.  Looking up is often an effective way to create an unusual point of view.

In late September we visited Colorado to see the autumn color.  Colorado has the best aspen trees of anywhere I have been and we were lucky to catch the autumn color near its peak.  I found these aspen trees growing just outside the town of Aspen.  I like these very tall trees with very white trunks and the yellow foliage in the background.

When I was driving one of the back roads of Gunnison NF, I came across this aspen grove.  The trees in the foreground had already lost most of their leaves so the early morning sun created very dramatic shadows on the road while the trees in the background still had most of their autumn color.  I like this combination of dramatic shadows in the foreground with yellow foliage and blue sky in the background.

On my last day in Colorado, it was rainy. It was not pouring, but a soft, gentle rain. I knew the conditions were not good for landscapes so I started looking for closeup shots. There were many water drops on the fallen leaves, but the way they had fallen was not particularly attractive. So I started moving the leaves I liked to a different location. It was very difficult to move the leaves without loosing the water drops and I was not always successful. But I was able to assemble a fairly large number of leaves with the water drops in tact and this image is the result of my efforts. I like the different colors in the image ranging from red to yellow and of course the water drops make it eye-catching. 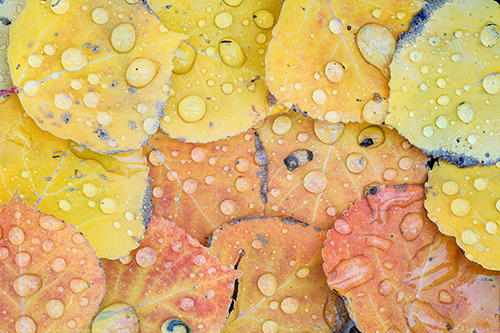 Wishing you the Best in 2016. I hope our paths may cross!

This entry was posted in Uncategorized. Bookmark the permalink.